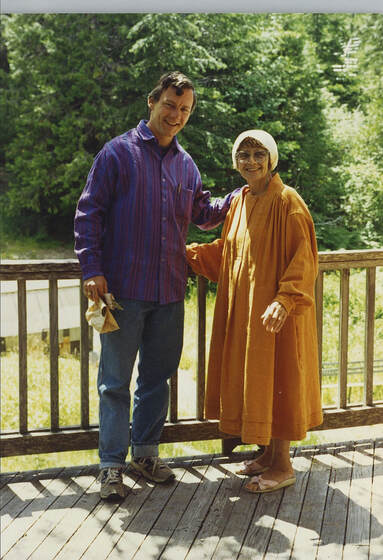 Robert Beatty and Ruth Denison
In the summer of 1980 I made a pilgrimage to the dry oak forests in the coastal mountains west of Palo Alto, CA. The Venerable Taungpulu Sayadaw, a famous eighty-four-year-old Burmese Buddhist master, was spending several months there. A white ranch-style house nestled into the mountainside had become his temporary monastery. His presence drew visitors from all over the United States. Everyone knew that it would be their only opportunity to meet and pay respects to this icon of Burmese Buddhism. Little did I know that this great monk would provide the connecting link to a relationship that was to transform my life.

On the second afternoon of my visit with Taungpulu Sayadaw I entered the monastery kitchen to find a woman of about sixty sitting with a bag of ice on her hand. She spoke with a strong German accent, “Dhalink, I have been stung by a bee and now my hand is swelling and painful.” I went to my first aid kit and returned with an antihistamine pill to help with the allergic response. She complained that her shoulder and arm were also aching and I offered to massage them. There was a remarkable familiarity between us and an easy flow of conversation. When we exchanged names I was startled to hear her say, “I am Ruth Denison.” I had for years heard stories of her creative teaching methods and knew her to be a highly respected Dharma teacher.

We moved to her camper parked in the shade of overhanging oaks. She had comfortable folding chairs, and iced tea to combat the hundred degree heat. In the comfort and safety of the connection with Ruth, I shared with her the most intimate details of my life and meditation practice. She met me with understanding at each turning of our conversation and sometimes seemed to know what I was thinking before the words came to my lips. Questions I had been longing to ask someone arose and I found her responses both comforting and clarifying. At one point I found myself in tears as she easily understood some personal struggles with which I had felt terribly alone. After five hours of conversation I made my way back to my car with a full heart.

Thus began a relationship that would shape the rest of my life. Never before had a Dharma teacher taken an active interest in me as a person. I had attended many retreats during the previous decade, but I was accustomed to being anonymous, sometimes one of a hundred people. On those large retreats interviews with a teacher occurred once or twice for a few minutes in the course of a ten day retreat and remained focused tightly upon the meditation. Ruth was interested in my life and how my meditation practice was integrating into every activity.

At the time of my first retreat with her, I had developed the ability to sit in what I thought was a developed meditation state for several hours at a stretch and was rather proud of this fact. My mind would get quiet and little would happen for long periods of time. I was always the first person in the meditation hall and the last one to leave at night. In fact I had learned to go into a sort of blurry trance which was neither insightful nor awake. Ruth noticed that I was constantly slumped and frequently nodding off. She came to me as I sat in the Dharma hall and said, “Robert, you are always tired. Tomorrow morning you stay in bed. I don’t want to see you here in the meditation room until eleven.”

This was heresy to me. My early years of training had stressed continuous, strenuous effort, minimal sleep, and long sittings. How would I ever get enlightened if I stayed in bed and didn’t put every ounce of effort I could into my practice?

Despite my reservations I was not about to disobey Ruth. I remained in bed in the morning when the wake-up bell rang. This was incredibly difficult. I was assailed by thoughts that I would never get enlightened, and that everyone would get “ahead” of me. Then I fell back to sleep, missed breakfast and didn’t stir till about 10 AM. I awoke with a start, had an guilt attack, and then hurriedly prepared to join the retreat. When I entered the meditation hall Ruth was leading the group in a mindful walk while she beat a drum to keep the pace. She guided us into the intimate details of each step, asking, “Are you attending to the moment that the toe leaves the ground? Notice the sensations as the clothing moves on your body! Are you present for this   momement of what you are seeing? Don’t go doodling off into your imagination! Are you here?”
In the next sitting I found myself awake and alert. The mind, rather than nodding off and wandering, began to focus and settle. Instead of the blurry, half-awake dream world to which I was accustomed I inhabited an articulate and bright inner reality. The beginning and ending of each breath stood out as discrete events. The mind’s movement toward wandering was obvious. I had heard countless Dharma talks about impermanence, and now I was witnessing it right before my eyes.

Ruth had taken an interest in my practice. She could see where I was off course in my meditation and where I was spinning my wheels in pointless ignorant effort. In later years as I consulted with her about my teaching she instructed me, “Robert if you want to help people you have to get under their skin.” She had found her way under mine and into the heart of a deeply held belief that in order to succeed I had to be constantly striving. Without her interest and guidance I would have spent many more years practicing and living with this major misunderstanding.

There have been many instances like this during the twenty five years I have known Ruth. I have attended many retreats with her visited her retreat center, Dhamma Dena, in the high desert near Joshua Tree California several times. On each occasion I took my most vital questions about my life and practice to her. She was present in my life at several decisive turning points and her teaching style has profoundly influenced mine.

I have heard many first hand stories over the years of how a few words from Ruth have illuminated a path out of suffering. She approached a friend as he was doing walking meditation and said, “You need to be more kind with yourself.” These few words, spoken by the right person at just the proper moment had a huge healing effect. I know of others whom Ruth has held in her heart and arms as they grieved the loss of a child or marriage. I’ve experienced and seen her to be fierce when cutting through delusion and tender when a gentle touch was needed.
​
From Ruth I have learned that a Dharma teacher does much more than instruct one in meditation. By “getting under the skin” the teacher becomes a catalyst for profound life changes and empowers the student to manifest their highest potentials.
I am profoundly grateful to Venerable Taungpulu Sayadaw for providing the ripe context in which I met Ruth Denison. My life has been transformed by the encounter.