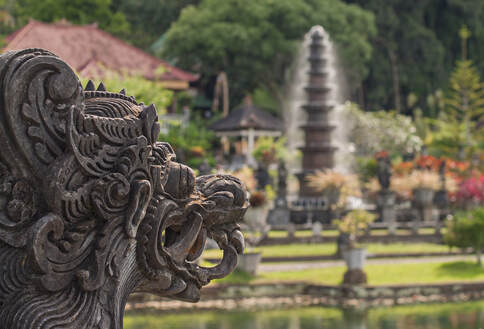 Fourteen years ago I attended a Balinese temple ceremony which began in the late afternoon and continued into the darkness of evening. The people of Penestanan, a village located on the outskirts of Ubud, Bali, had spent the prior week decorating their temple with golden and multicolored parasols on long yellow and red poles. They dressed ancient stone statues in new sarongs made of traditional black and white checkered cotton. There were flowers, baskets of fruit offerings and incense everywhere. The air was filled with dynamic rhythms of the gamelan orchestra with its gongs, drums and flutes.

I was the guest of a schoolteacher named Darsa. He introduced me to countless people and as we made our way through the throngs he was constantly greeting others, reaching out and touching a hand, nodding and saying a few words to passersby. Over a thousand people congregated. After the ceremonies, because there were no streetlights, Darsa offered to walk me back to my hotel. As we passed through a pitch black serpentine road cut that led down to a small river I asked him, “How many of those people do you know?” He replied, “Well all of them, of course, this is my village.” He then added, “That is not correct. I was away teaching for two years and the children born during that time, who are now teenagers, I only know a little.”
His statement has stayed with me all these years. I have often wondered what it would be like to be so closely woven into the fabric of a community.

Every evening this week Nancy and I have been treated to gamelan music floating on the wind from Darsa’s temple about half a mile to the West of our cottage. The orchestra is practicing for the ceremony scheduled for tonight. Once again the villagers have spent the entire week decorating the temple. Nancy and I will attend the ceremony with our hosts Made and Jess, owners of the cottage in which we are staying. They will dress us in traditional temple clothing of sarongs and brightly colored tops. I will wear a headdress made of fabric with intricate folds. We will join hundreds of people, all of whom have known each other for their entire lives as they practice their religion of Balinese Hinduism.

Yesterday, while returning from shopping for a Buddha statue for our new Dharma hall, Jess’s van was flagged down by a man indicating we must take an alternate route. On both sides of the road people congregated and everyone’s neck was craned back as they looked up in the direction of the stone walled temple straight in front of us. Silhouetted against the blue sky were two parallel tree stumps about sixty feet high. All the branches were removed and only the trunks, about five feet in diameter, remained. This ancient temple tree was damaged by wind during a severe thunderstorm a few days earlier and was at risk of falling on the temple and nearby houses. A man standing on top of the shorter stump, wielding an ax, was chopping a deep notch into the taller stump. A rope from the top descended to a group of a dozen men who pulled on it with the entire weight of their bodies as if attempting to win a tug of war. In everyday life these men wear slacks and shirts, but because they were working on the sacred site, they dressed in sarongs. There was banter and laughter, and a sense of tense anticipation as they yelled from the ground to the fellow chopping high above. The tree was hardwood and he paused occasionally to rest. A sharp cracking split the air and the men gave a great shout and pulled mightily on the rope. The huge chunk of tree teetered and then plummeted to the ground with a crash, demolishing a few feet of a brick wall. The men, suddenly released from the tension of the rope, staggered backward into the ditch on the far side of the road and tumbled on top of one another. They laughed as they helped each other up and went to admire the fruits of their handiwork. The log was about ten feet long and must have weighed more than a ton. Since this tree grew on temple grounds, it is considered sacred and every piece of it will be used for special carvings.

The life of a Balinese village revolves around the temple. It provides a focus for worship, ceremonies marking life’s transitions, and a setting for community activities. As an integral part of the Balinese sense of identity it is difficult for us to imagine how important the temple is. My guide on a prior visit had spent two years living in America as he helped write an anthropology book about Balinese culture. He said he had enjoyed America, but that, “I slowly went crazy because I missed my temple too much”.

In America we emphasize individuality over engagement in community. We are expected to make our own way in the world. We train our children to become “independent” and as parents we do everything we can not to be a “burden upon our children.” It is considered normal and even desirable to follow the model of the pioneers, pull up stakes and move to another city, leaving friends and family behind. The privileged in our society practice the ritual of “sending the kids off to college” as one way of manifesting this value of separation and autonomy. This style of being in the world has certain powerful advantages. Individuation is possible in ways that cannot happen within the constraints of the extended family. We are taught to be entrepreneurial, to “make something of our lives”. The shadow side of this individuality is isolation, loneliness and the sense that we don’t really belong anywhere.

We take this emphasis upon the individual for granted. It is woven into the fabric of our lives. Corporations rely upon our willingness to uproot to provide a flexible and mobile work force. Promotion often means a move. If we lose our job or fall on hard times we rely upon the anonymous, and shrinking, safety net of government unemployment benefits and vanishing social services. We turn to our family only as a last resort. Under the guise of “tax reform” we are demonstrating that our sense of relatedness and mutual responsibility is diminishing. We are increasingly embracing an ethic of “every person for themselves”. I, Me and Mine is replacing Ours.

Spiritual community is an antidote to this modern problem of isolation, however with so much conditioning emphasizing individuality; we have a lot to learn in the realm of community. As we move out of isolation and self reliance into relationship, each of us faces challenging questions. How involved do I want to be? What needs of the community will I respond to? Can I relinquish some of my self reliance and ask for help? How will I balance my work and family life with that of the community? Can I remain in relationship when things don’t go the way I want? Can I find my voice and speak my views clearly? Can I engage fully without losing my self?
​
Preparing our new Dharma center has already catalyzed participation and interconnectedness in exactly the same way that the Balinese temple weaves together the life of a village. A remarkable number of highly competent members of the PIMC community have stepped forward offering their skills, creativity, and enthusiasm. We too have trees to take down, decorations to put up, celebrations to plan, retreats to sit, and fundraising to do. Our community is coming together and support for our new home is extraordinary.
Since the time of the Buddha his followers have created communities in which the values of generosity, compassion, lovingkindness and awareness were nurtured. We are following in that tradition, creating for ourselves and for future generations, a place of refuge, meditation practice, instruction, and spiritual inspiration.