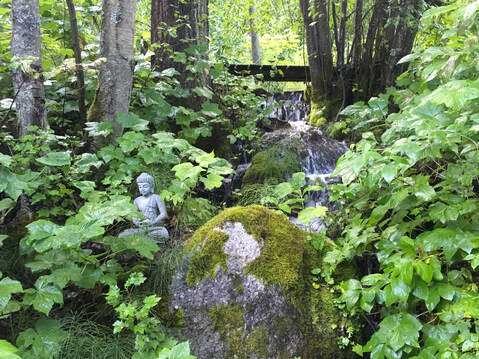 One sunny warm afternoon in 1973 I walked slowly around the retreat center garden in San Jose, California. Each circle took about 20 minutes at the glacial pace of slow walking meditation. The highlight of each revolution was passing the Chilean Jasmine vine. Every in-breath within ten feet of that vibrant green with small five pointed white flowers was an intense delight of floral perfume. The slow pace and apparent outer calm belied the torrents of thoughts that filled my mind. Despite diligent efforts to remain present, my mind seemed constantly lost in long emotion-driven wanderings. At times I would circle the entire garden with only a few moments not immersed in the trance of thoughts and feelings. I experienced this out-of-control mind as distinctly unpleasant and exceedingly frustrating. Doubting thoughts arose. I wondered if I could ever learn to meditate, whether my situation was hopeless, and whether I should just quit the retreat and go home. I became increasingly despondent and dispirited.

When I spoke with my teacher about my sense of failure and hopelessness, I was surprised when he stood up and indicated that I follow him. He led me to a small hallway and stopped in front of the framed black and white photograph of a stern-looking monk who sat cross legged and gazed directly into the camera. He explained; “This is the Mahasi Sayadaw, an enlightened Burmese meditation master. The only difference between you and him is that he began again a million more times than you.” He went on to explain that I was discovering the fact that I was unconscious most of the time and didn’t even know it. I was discovering the magnitude of the problem. Training the mind to remain in the present rather than drifting off into the fantasy world of concepts and ideas would require years of diligent effort.

I was comforted by my teacher’s explanation though I didn’t forsee that his advice would remain so applicable several decades later. While I have certainly matured, and some of my neurotic patterns are mere shadows of their former selves, this human mind continues to require diligent observation and training.
The untrained human mind exists in a sort of semi-awake state we might call the “trance of everyday life.” With undeveloped mindfulness and weak concentration, we blunder through life at the mercy of our prior conditioning. The patterns installed by our mammalian roots, our culture and the crucible of our family of origin drive our thoughts, speech and action. Unaware of our programming, we act out a script. The “conditioned mind” is astoundingly powerful because it operates in the shadows outside the purview of awareness. Most people are unaware that their mind wanders, let alone capable of observing unconscious feelings and motives. When unable to observe the activities of the mind, we cannot reflect upon beliefs, emotions, moods, values and perceptions. They are experienced as the “truth.” The Buddha declared that the mind of such a ‘worldling’ remains capable of inciting the most heinous acts. Only through awakening from the trance of identification with the contents of the mind can one be free.

If we are very fortunate, at some point in our life we become aware that living unconsciously is unbearably painful. We suffer continuously by demanding that reality conform to our desires and fantasies. Through a life experience or some spiritual practice a crack opens in consciousness and we get a glimpse of the possibility and necessity of living more consciously. We begin to look inward for the path to happiness rather than exclusively to the experiences that are available through the senses. The magnitude of the journey is unknown to us as we begin, but the direction is clear. We must observe the conditionings that hold us in thrall and set ourselves free.

When we take up a spiritual discipline in order to develop mental stability and awareness we discover how rare the moments of being truly present to reality actually are. We find that we have been sleepwalking through life mistaking concepts, ideas and images for reality. I became totally convinced of this once on a meditation retreat when caught in a wandering mind that I “knew” I was in my family home and preparing to leave to go to high school. When I reached out for the doorknob I was startled to find it to be the wrong shape. I was startled out of delusion to realize that I was in a meditation room three thousand miles away from my childhood home and fifteen years later in my life. The wandering mind had been totally convincing.
We begin with a mind that may be lost in delusion almost all the time, even when we are sitting in meditation. As mindfulness and concentration develop we begin to awaken more often, though the wanderings may still be measured in minutes or hours. Eventually, mindfulness grows into a powerful force that can observe the mind as it prepares itself to begin to wander. In every case the advice of my teacher remains the same, “begin again.”

This recommendation is as relevant to a person sitting in meditation whose mind has been wandering for a few seconds as it is to someone who has been intending to get back to meditation after a lapse of weeks, months or years. Some wandering minds are so convincing that one is totally ensnared by the trance of every day life for a while.
​
Then, once more, life may take a twist that wakes one up. This is another opportunity to “begin again.”